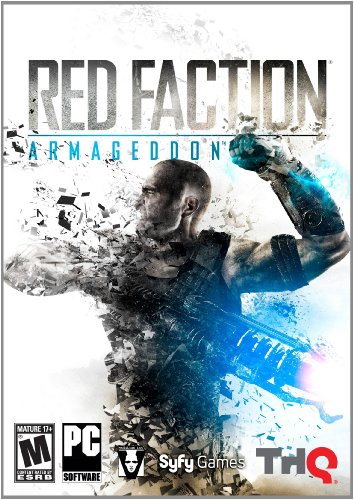 A long-dormant evil emerges from the caves of Mars, unleashing Armageddon on the planet’s colonists. With this force stopping at nothing to cleanse the planet of life, mankind finds itself poised on the brink of extinction. Red Faction Armageddon expands on the critically acclaimed, best-selling franchise with new, groundbreaking challenges. You are humanity’s last hope for survival.

Old-School Alien Shoot-’em-up With a Good PC Port Ignore the Red Faction title of this game as it has very little to do with the average FPS from a decade ago or the open-world destruct-a-thon from a couple years ago. Red Faction: Armageddon is a straight-up alien blasting good time with great weapons and great environment destruction, end of story.Here’s the rundown:Pros:+ Fast-paced alien shooting that might remind you of older games like Quake 2 or Half-Life but with a third-person perspective.+ Unique and fun to use weapons like a magnet gun that flings objects together (including enemies) and a plasma gun that charges up and then destroys entire areas with swirling gravity.+ Impressive destruction where every building is able to be destroyed. While not a core gameplay elements like the last game this still adds a ton of weight and spectacle to every firefight.+ Pretty passable story with some funny lines and interesting locations. Design is generally solid with well-defined character outfits and unique locations.+ Upgrade system that lets you improve abilities you like and buff up general stats like health and weapon recoil. You upgrade through finding “salvage” which is spread out in the larger environments. Though still linear the game does have a strong exploration elements due to this.+ Online modes add some fun like a typical hoard mode where you stay alive through as many enemy waves as possible and a mode where you cause as much destruction as you can in a limited time. Leaderboard support for both.+ Better PC port than previous Volition games in the last few years. Good framerate and smooth mouse control. Lots of video options (though sadly no option to increase pop-in distance).Cons:- Enemies can get repetitive to fight as for most of the game you will be killing the same type of bugs in new environments. I’m so used to fighting humans lately though that I think this repetitiveness is lessened somewhat.- You can only carry four guns at a time, a limitation likely forced by the console versions, which dampens your ability to experiment with the fun weaponry.- Destruction could be used in mission objectives more often.- Story videos are in a low resolution with a lot of compression, which is typical of games lately but still annoying. Switching from 1080p gameplay to a 720p compressed video is really jarring.- Steamworks DRM might be off-putting to some customers.All in all RF:A is a fun game for people like me who like relatively linear shooters with solid combat. The faster pace and alien enemies give it an old-school feel compared to the “realistic” human shooting we see most of the time these days and the graphics and design presents a vivid and fun to explore Mars of the future. The PC port is good showing only the typical signs of multiplatform development with no real issues. If you’re looking for a good 10-12 hours of alien shooting fun I would go ahead and purchase RF:A when it hits a price you can accept.

Good ole destructive fun. Loved Red Faction Guerilla although it still left something to be desired on a game play level. The vehicles were clumsy, but driving around from mission to mission while tedious did give a sense of pleasure. Destroying sectors and bases was a lot of fun, and really the meat and potatoes of the game. Well with RF Armageddon it’s a whole new can of worms. The game play is more linear and you just basically follow the instructions you are given to complete your objectives. Sounds boring right? Wrong. It’s nice to have a sense of directions and while i loved the last game, along with games like Just Cause 2 and Assassins Creed 2, having all free roam territory isn’t always the funnest way to play. No disrespect to those titles, but it’s nice just to have an objective, go to it, complete it and move on, without running around all over the place. I rate this with Resident Evil 4,5, Dead Space 1, 2, and even Mass Effect, it’s a great platformer. The thing that sets this game apart is the sheer brilliance of the psychics and the ability to destroy and repair nearly everything in the game. Speaking of the repair feature, after destroying platforms, crates, walls and everything else around you, you can use your repair tool(i forgot the name of it) to rebuild these things back to the original condition. Which comes in handy if you need to backtrack or hide from enemies that have destroyed your hiding places. Very clever. Also destroying platforms, or blocking a path to avoid being followed is brilliant as well. No other game out there can claim this unique feature.Graphically, for PC that is, it depends on your specs. I have an Acer M5800, with an ATI Radeon 4850 1 gig of DDR3 RAM, 8 gigs of memory, and a Core 2 Quad Q9400 processor. I had no problems running the game at full 1080p, only on a few parts was is laggy, but i think it was just a bug or glitch in the game. Nothing a simple update can’t fix, which is always the case with PC games. Surprisingly thus far the game is smooth and bug free. So graphics wise it looks great, and just as good as anything out there, which to me is fine. I don’t really know what people consider GREAT graphics these days, but this one is on the cartoonish side, in the vein of say Infamous 2 or something along those lines. Texture do stand out as realistic, and THQ is a great company for high end graphics, so i guess this gets an 8 out of 10. No need to describe the gameplay, since i really already did, it’s smooth, and moving with the mouse and keyboard is very in sync. Aiming also is spot on. So if you wanta great game that probably will take you i would say around 13 hours or so to complete, and has more features to offer other than the main game. Then this is for you. I’m no where near done but i have heard that’s about the time it takes to complete. Which is great. So enjoy some good old destructive fun, and don’t worry about all the hype of some more popular titles. I’ll take this any day over many of the more recent releases. And this i consider one of the best. Now i’m waiting for Duke Nukem Forever and Alice:Return To Madness(M Rated) so should be good.

Right Direction; Gets Repetitive So the last Red Faction game featured a sandbox style of play, and while the open terrain was fun to travel through and the “cities” were fun to destroy, it became tedious to meet timed objectives when you had to drive for 10 minutes…Red Faction Armageddon solved this by making it into a linear experience. The first action in-game was astounding. The new destructive engine was tangible. Using the magnet gun to tear the building out from under enemies was a blast, which leads to the two major flaws, in my opinion:1: 80% of the game (which is really only about 5 or 6 hours) is spent killing aliens. There were more than three kinds, but they basically fell into only three types: crawlers, jumpers, and “tanks”. The enemy types got stale once you learned the best tactic – it became a methodical process of eliminating priorities…2: Weapon – You could only equip four weapons, which is plenty, but I seriously don’t think there are four USEFUL weapons. The Sledgehammer is fun to tear things down with, but never a viable combat choice. I found myself using the assault rifle, magnet gun, and either the rocket launcher or grenade launcher through most of the game.Overall, it was a fun gun & run, but wait for the price to drop, or something. I know through Steam it’s still pretty pricey…