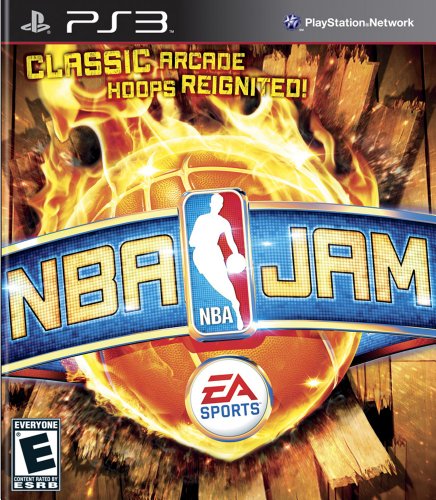 EA sports is bringing NBA Jam to a 2010 audience with everything that fans remember about the original (revolutionary visuals, over-the top gameplay and numerous unlocks and cheat codes) PLUS online capability. The winner of 8 “Best Sports Game of E3” award, including the Game Critics Award, NBA Jam is a high-octane video game that is fun for everyone!

NBA JAM for PlayStation 3 is an unique multiplayer arcade style basketball game that mixes the over-the-top fun of the original, old school, coin-operated two-on-two game, with modern gaming graphics. Designed with Next-Gen consoles in mind, the game preserves the distinct visual 2D style of the arcade classic which incorporates specific player and coaches likeness’, but adds crisp court, crowd and scoring celebration details that are only possible with modern gaming consoles. Additional features include in-game unlockables, representation from every team in the league and boss battles against some of the best NBA players in history. 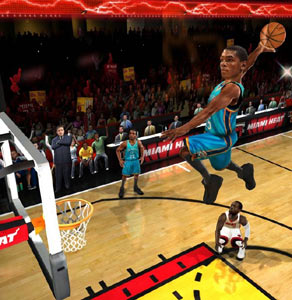 The Return of Classic Arcade Basketball

Featuring the sights and sounds that fans of the franchise will instantly recognize, EA Sports’ NBA JAM mixes old school and new school round ball stylings to deliver a one-of-a-kind sports presentation on PlayStation 3. In this all-new showcase for the game, shoves, spins and of course, backboard smashing dunks, take center stage in the classic two vs. two gameplay that is at the core of NBA JAM. In these battles, every team in the league is represented, with your favorite NBA marquee players from each ready to do your bidding in the paint, in transition and maybe, even on D. Designed first and foremost to be fun, the outlandish moves possible for all in-game players throughout the game feature pick-up-and-play controls, meaning that anybody can be slamming jams home and knocking down 3s in seconds. In addition, players can share the action and fun with friends everywhere, via the game’s 4-player support both locally and online. Over-the-top NBA arcade action awaits, as well as few special boss battles on the hardwood that NBA fans must see to believe.

In addition to frenetic MVP action above the rim, NBA JAM brings a unique visual style to PS3. Unmatched player likeness and reactions exaggerate the outrageous moves that make up the core JAM experience, elevating the already intense gameplay to new heights. Couple all this with a wealth of game modes, classic JAM gameplay, more than 100 cheat codes and loads of unlockables and you’ll see why the revival of NBA JAM is a slam dunk on any gamer’s home court.

Buy “ON FIRE EDITION” on PSN There’s a new version of this game. As far as I can tell it’s only available on PSN and there have been no updates to this original (ps3) version. (It’s probably available on Xbox as well, but I don’t have one so I can’t say.) The “ON FIRE EDITION” is on PSN for $14.99 and it’s superior in every way. Just updated and fixed across the board. Check it out. There’s also a free demo. Hopefully Amazon starts carrying PSN merch again, until then you have to use the PSN store.

The Best version yet – HIGHLY RECOMMENDED!!! I got this game on 11/16/10 – and played it enough to evaluate the gameplay and campaign mode. **EDIT** Also played online solo mode (with 3 other onle players).In short – it is a clone of the original arcade hit, with some notable additions.The campaign mode is basically a 2 on 2 basketball game, with actual NBA players (the best players on each team are available – no bench players). This is Arcade basketball at its best – no fouls, no timeouts, no out of bounds and NO REFS. There is a 24 second shot clock, and you can get called for goal-tending once in a while.The controls are simple:ON OFFENSE, you can perform some rediculous dunks, and if you are skilled enough, you can get some jumpshots in. You can pass, upfake, throw elbows, do crossovers and jump for an alley-oop (the last 2 are additions to the original). You only contol 1 player, but you can call for a pass as well as make your team-mate shoot/dunk. You can also throw elbows and knock a defender to the floor if he is too close.ON DEFENSE: You can steal the ball (this requires some timing), shove any opposing player to the floor (if you miss the shove, your opponent can blow right by you) and rebound. You can also intercept a pass if you are in the right position. BUT THE BEST PART ABOUT DEFENSE is BLOCKING SHOTS. You have to be in the right position and time it right – but the absolute joy of stuffing the opponent’s shot is unlike any other feeling in a game (in my opinion). You can even block a dunk – if you are get there at the top of the opponent’s jump.On both offense and defense, you can shove an opponent to the floor (on offense only if you are not the ballhandler).EA also kept the play by play announcer from the original – Tim Kitzrow. All of the original humorous calls are here – with tons of new “Jamonics” added. You will find yourself cracking up in the middle of gameplay when you hear some of these.You can unlock past players with specific achievements – this is another great feature of this game – Magic, Larry (Bird and Johnson), Schrempf, Dominique, Rodman, McHale and much more. You can also play as Politicians, the Beastie Boys and other non NBA teams.The original arcade game did not look as good as this (it was not in HD). The vibrant colors and the clarity of the players faces in this HD version really stand out. The Big Head Mode is unlocked by finishing the tutorial.You can team up locally against the cpu (or vs a friend), ** Edit or 2 vs 2 locally ** or you can play solo online, or as a team.There are other modes as well as robust online features (available as a day one patch).**Edit** I’ve played a few games online (2 vs 2)- there is no lag in the gameplay – just pure excitement.**The games are only 3 minutes per quarter – which I thought was too short before I started playing. But with the clock stopping after every shot (and at goal-tending and shot clock violation) the actual time for a complete is closer to 15 minutes, which turned out to be perfect. I never got the feeling that the game was too short once a game is completed.I haven’t been a fan of EA Sports lately – BUT they got this one right. Originally slated as a stripped doen free downloadable – they added all of the content as the Wii version, plus the vast online features and sell it for the same price.If you were skeptical about buying this game – Don’t be.If you ever dropped quarters in the original Arcade game – I highly recommend this.If you have’nt played the Arcade version, and only played previous console versions, you won’t get a true sense of this version. This is WAY better than any older home version!!!If you have’t played any version and wan’t a purely fun game for you and friends – then get this. Especially if you are a fan of the NBA present and 15-20 years ago.The original Arcade game was an Internationl Superhit – this version is even better.

NBA Jam Returns to Current Generation Consoles NBA Jam is an arcade basketball game that was first released in the arcades and Super Nintendo/Sega Genesis game systems back in the 1990s which I imensly enjoyed so natrually when I heard that it was going to be remade for the Playstation 3, I was very happy and decided I had to buy it. I brought NBA Jam for PS3 and am happy to say that It plays quite similarly to the version that was released for SNES/Genesis. The game is very easy to pick up and play and it does not have a steep learning curve. The goal of the game is to defeat all 30 NBA teams with a team of your choosing. There are really no rules execpt for goaltending and the 24 second shot clock so you may steal the ball from your opponents by any means nesessary including shoving them granted you have enough turbo to perform a shove. This new NBA Jam has some new game modes in addition to the classic campaign mode such as backboard smash in which the first team to break the glass via dunks wins the game as well as 21 in which the first player to get a score of 21 wins. NBA Jam for PS3 supports earning trophies for in game accomplishments such as beating all 30 teams defeating a game mode called remix tour which is a variation of the classic campaign mode in which you play different types of basketball games each with their own rules and requirements which to me adds value to the game. If you like arcade basketball games and easy to earn trophy games, then this game is definitely for you.