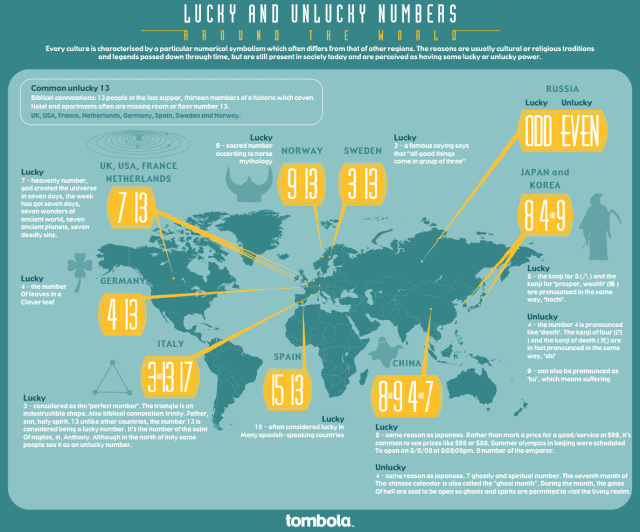 So here’s a pretty cool infographic for ya’ll, Lucky and Unlucky Numbers Around the World. Like the title suggest today’s infographic looks at the different unlucky numbers in various cultures around the world. Admittedly I am not very superstitious although I certainly try to not do things that may bring me bad luck. Here in the United States along with the UK, France, and the Netherland we consider the number seven to be lucky, why? Well like many other things in American culture this has religious roots coming from God making the universe in 7 days and the 7 deadly sins. However it also references the 7 wonders of the ancient world as well as the 7 planets of the ancient world.

A number popping up around the world is the number three, considered to be the perfect number. It even has a saying “all good things come in threes.” There is the triangle which is considered to be an indestructible shape and again we have the biblical reference to the trinity.

On a different note as I write this I am rewatching Arrested Development for the hundredth time and could not be more excited for the new season coming in Spring. Every time I go through and watch the series again I pick up more and more inside jokes and intertwining story lines than I did the time before. I can’t possibly imagine how good the new season is going to be and better yet the movie. [tombola bingo]