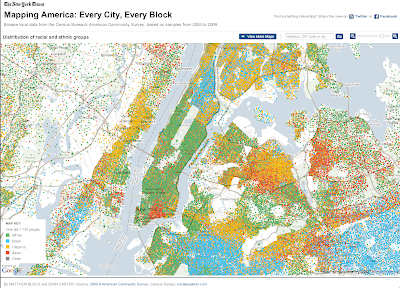 Census: a great opportunity for databases and maps

United States is not just the ‘land of opportunities’, but also the land of Open Data. From Spain, we are really jealous of how the government offers data in different lenguages and formats to be used and consulted by citizens and media.

One good example is the 2010 census: all kind of data about the population of such big and heterogeneous country is a very big opportunity to show what can we do with all that data and make it easy to access for citizens. Global and local, giving a general idea of the country, but also allowing people to check information of their own neighborhoods.

These are some examples of work with this information:
(If you know other interesting examples, just tell me in the comments of this post)


The New York Times
Mapping America: Every city, every block

I’ve talked about it separately. It really amazed me when I first looked at it. The different layers of information, the details, the fact that you can take a look to all the country, but also look for the data not just of your neighborhood but, in some cases, your own building! 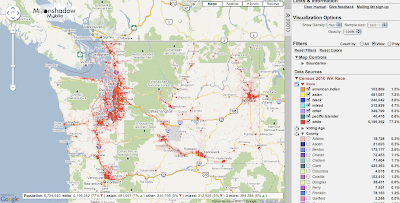 It gives you the possibilty to go really deep and with many options, but only state by state (and just some of them). The creators of this technology think that what makes these maps different is the speed and the amount of data they can handle: “Our technology is software only and it is typically hosted in the cloud. As a result of our speed advantage we can work with much larger databases. Whereas others visualize 1,000 to 10,000 records in Google Maps we have visualized databases with over 100 million records. “ 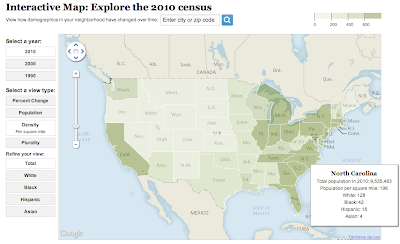 The Washington Post graphic is not as complete as the previous one, but gives you the option to compare the data with previous census. You could also seacrh for different visual stories on their main page of the census.

The Wall Street Journal
America in 2010 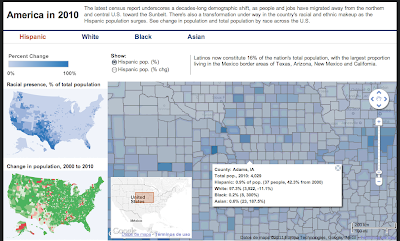 Although you can find different graphics of the census on WSJ.com,  they are not as easy to use as WaPo’s or NYT. The good thing is you can reach the information of each county, with goes more local than WaPo’s, but not as detailed as its neighbour, the Gray Lady.

These are just some examples. Share in comments other interesting things if you know them, and I’ll add them to this post.